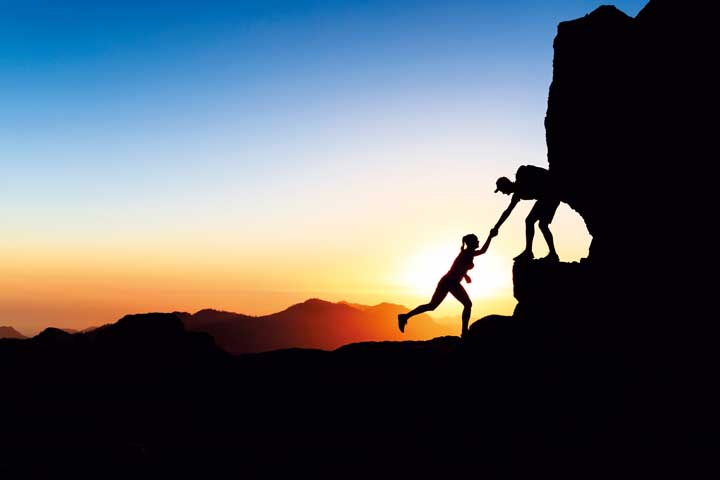 A hand to hold

Solicitor Andrew Woo leads the family law team at Brewer, Harding and Rowe’s Bideford office. Re:story asked him: what happens when a woman who has experienced domestic abuse engages a solicitor?

We help a lot of people who are victims of domestic abuse,’ says Andrew, ‘and this often includes issues around children and money – the most emotive issues of all.’
Born and bred a Brummie, Andrew has lived in north Devon since 1994, and says, ‘over the years I’ve discovered a passion for an area of work I didn’t necessarily expect to be doing for all of my career and end up specialising in’.

So how does he get involved with cases of domestic abuse? ‘A typical scenario would be that a victim becomes known to the police, a Domestic Abuse Service such as North Devon against Domestic Abuse (NDADA) or Children’s Services Social Services, who then advise the victim that they need legal advice.
‘A lot of victims put up with abuse for a long time before they do anything about it. You can understand why, because they often have no independent source of income, mouths to feed and have been socially isolated so they no longer have family or friends to turn to.

‘Their call might come through to me or to any one of my colleagues in the family law team: Emily Souch, Jessie Allen, Nigel Treasaden, Kevin Wigley or Rod Ball, at which point an appointment is made and the client then gets free initial advice.

‘We explore whether or not they might be able to get Legal Aid, as we are one of the few practices which still has a Legal Aid contract in this locality. I then explain what the options are, which could include protecting themselves and their children via an injunction.’ Andrew will help the client in preparing the injunction application papers and then represent them in court to get an order to prevent further threats or violence.

’You can get Legal Aid in order to apply for an injunction provided you qualify financially,’ says Andrew. ‘You can also get Legal Aid for financial or children matters if you can prove that domestic abuse or child abuse is a relevant factor in the case.

‘The order is then served on the perpetrator which could last for six months, and if they breach that order, the police can arrest them.

‘What’s interesting is how the attitude of the police has changed over the years; what was once seen as “just a domestic” is now taken extremely seriously and treated in exactly the same way as if you were assaulted in the street by a stranger. It’s much better than when I started working in this field 20 years ago.

‘Another positive development has been the research which has shown the effect on children of domestic abuse. Previously, the general approach in court proceedings was “you could be a crook, or you could be violent, but that doesn’t necessarily mean that you are a bad dad“. However, research has shown that even at a very young age children can be affected by domestic abuse between their parents and the effects stay with them for a very long time. It is therefore now a factor which can be relevant to the court deciding upon the appropriate arrangements for a child.

‘After the immediate situation is made safer with an injunction, we look at longer term issues such as what will happen to the children so they can have a meaningful and safe relationship with both parents. If the parents can agree, so much the better. It should be the last resort to go to court over children. Financial matters also need sorting out as they may have a house, other assets (such as pensions) or debts together.

‘Occasionally, if the domestic abuse is not acted upon and the children continue to be exposed to it, then the local authority can get involved and the children removed. In such cases, I can either represent the children or one of their parents as an accredited Children Panel Solicitor. Having a solicitor who is a specialist in this particular area of family law is important.’
Do you encounter many happy endings? ‘Yes, and there are different types. It’s refreshing when you get a case [not an abuse case] where after a period of going through divorce negotiations a client tells me they are going to give their relationship another go, and in this society of instant gratification, I find such cases particularly heartening.

‘You also get some happy stories where after taking the Building Better Relationships course, perpetrators of domestic violence understand the impact of their behaviour and manage to change. Even if the couple doesn’t get back together, they can improve their relationship. That’s essential because ideally, parents need to make decisions together for a very long time – the children will need both of them when it comes to girlfriend/boyfriend problems, graduations, weddings and all manner of issues well into their adulthood. Sadly, that is not always possible and I always try to make what is, by definition, a very stressful and emotional time, a little less difficult.’

Who get get legal aid?
It’s available to those who can prove financial eligibility and who need to get advice or take action to protect themselves or the family. It’s also available to deal with financial or children issues if the client can prove domestic or child abuse, e.g. a criminal conviction on the part of the perpetrator, a medical assessment or a stay of 24 hours or more at a refuge.

What’s an injunction?
An injunction is to stop someone from doing something and in cases of domestic abuse can keep the perpetrator out of the family home, away from the victims and protect from harassment, threats or violence.